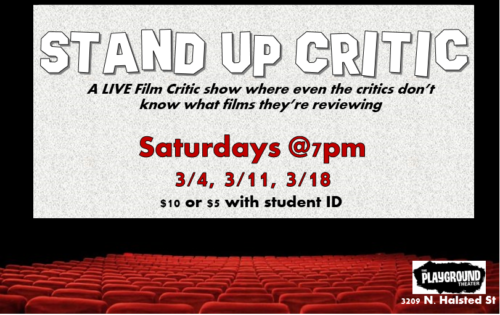 What do these things have in common? For some reason, people want to hear strangers’ opinions on movies simply because those strangers self-identify as critics.

“Stand Up Critic” presents its eager audience with a LIVE film criticism show, but with a fun TWIST: our Critics will have no prior knowledge of what films they’ll be reviewing. Instead, Critics will draw on their vast movie knowledge to give their honest, on-the-spot review of these films.

“Stand Up Critic” joins stand up and improv together and takes them to the movies!